Promoting the Preservation and Use of the Postwar Morris Minor

Right interior for a '61

Discuss other problems here.
Forum rules
By using this site, you agree to our rules. Please see: Terms of Use
Post Reply
11 posts • Page 1 of 1

Right interior for a '61

I've just got my first Minor, it wasn't planed, but as I looked at her it was love at first sight, so I had to bring her home with me.
She left the factory on june the 06. in 1961, where she was supplied with red interior and painted inYukon Gray.
The explanation for why she's called Miss Marple is quite simple.She's a relaibly and lovely old lady, gray and as British as it get's

Beside that, it's the same initials ;)

She is pretty original in generally, but during the past 61 years, there's a few parts who is either changed, missing or simply worn out.
I wants to make her back to a standard, as close as possible to how she looked in june 1961. But I need help from some of You experts.

I know that Yukon was called GR-7 bach then, but what is it called in modern codes?
A guy I know, tried to "read" the colour with some kind of a scanner. He did it on spots, who hasn't got lightend by the sun during the many years.
All of this measuring gave the following two results: RAL 7022 Gray Umbra and NCS S8000-N.
Does anyone know, if that is the right Morris Minor Yukon Gray? I think it's a whole lot darker (and a bit brown) than other Yukon's I've seen.

The other question is about the interior, because I've tried to look MM's from 1961 up on the internet, to see how the interior should look like.
I've seen some with plain door trim, and some with 3 panels. But which is the right one?
And the plates in the back, looks like it's from a newer model. Because they don't fit at all along the seat.
(The back is also from a wrong model)

I sincerly hope that anyone will help me.

Best regards from a very happy MMO in Denmark 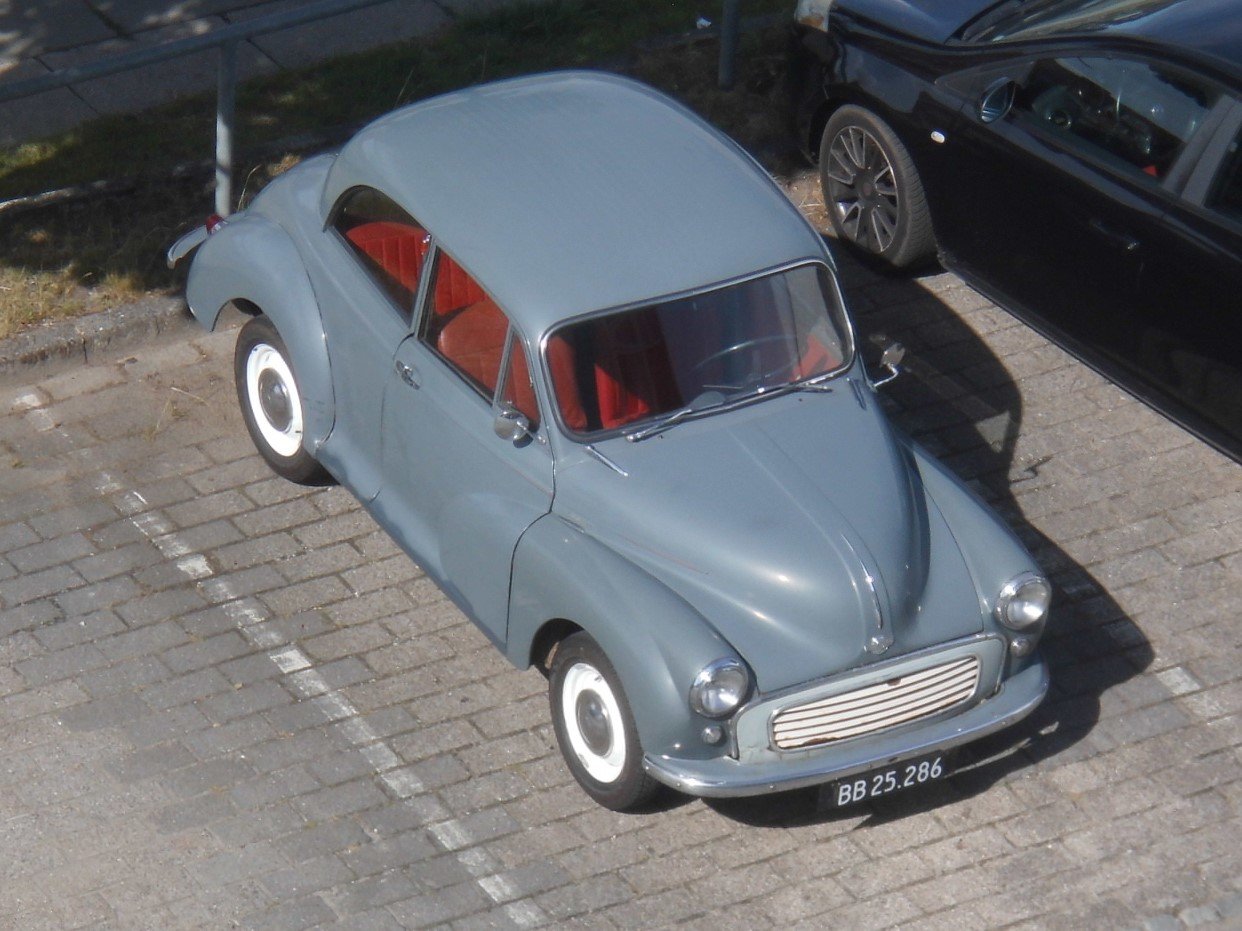 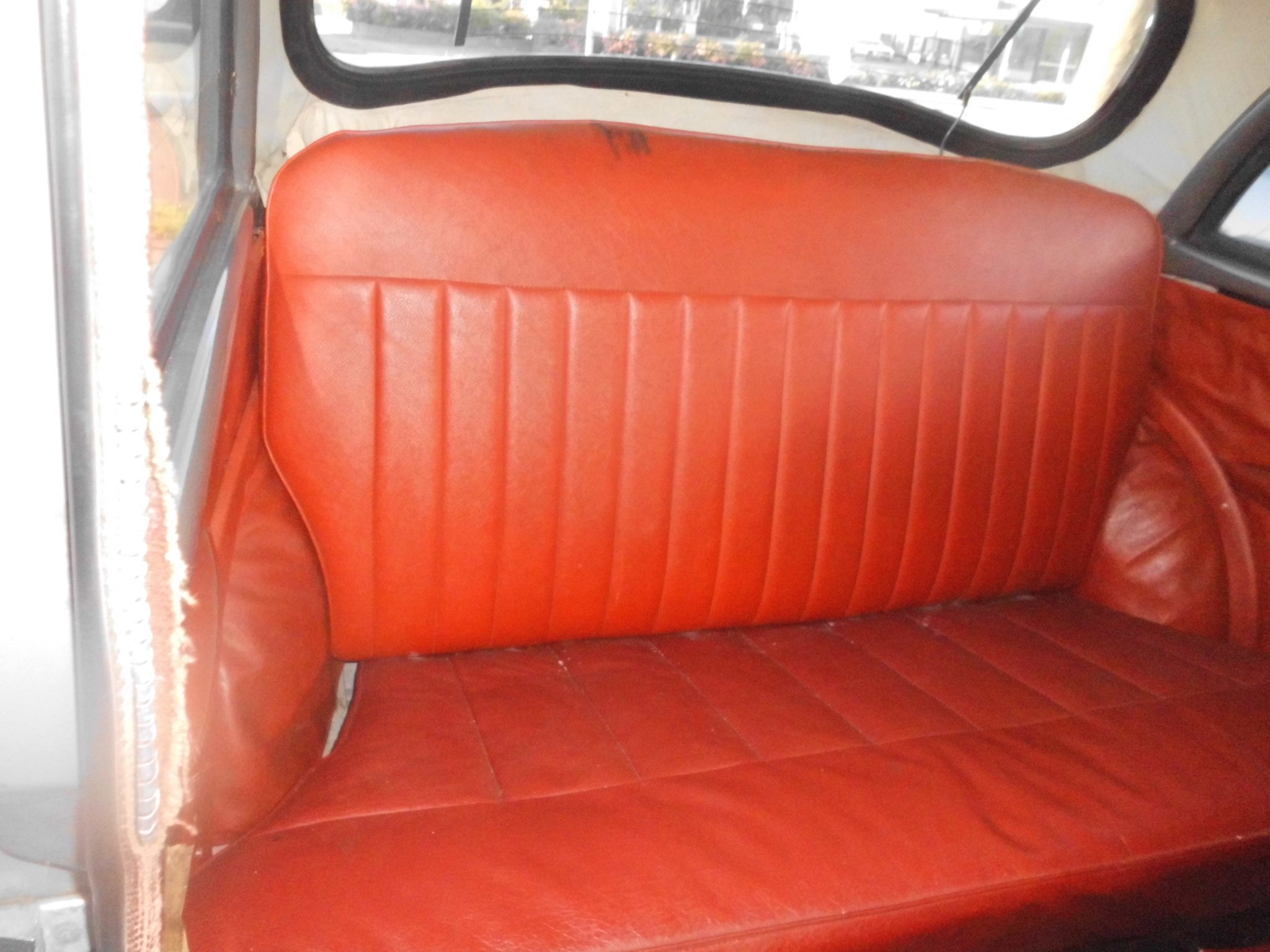 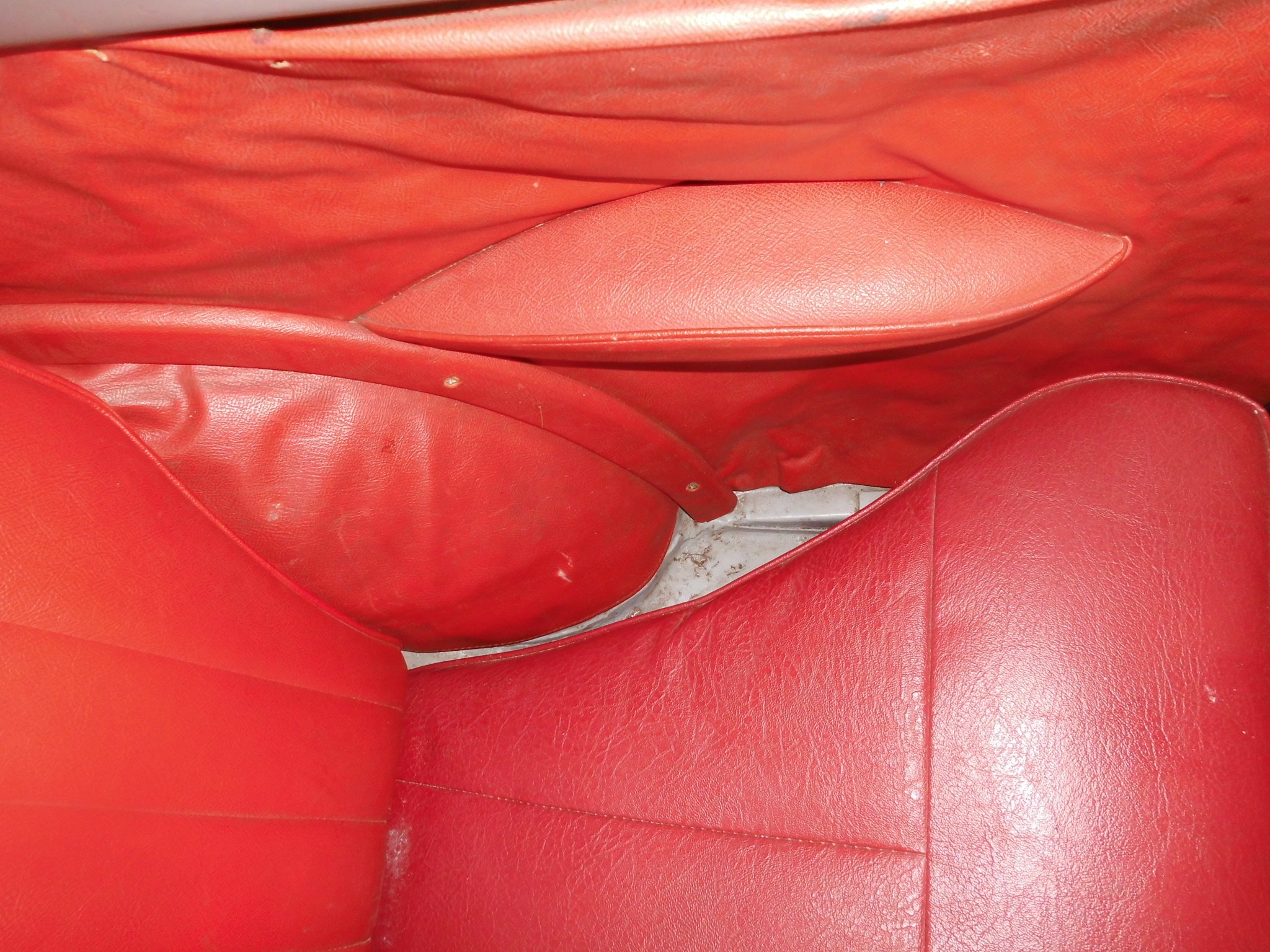 Welcome to Morris Minor ownership! Like most Morris Minors now, your car has seen some changes during its life. Yukon Grey is, as you say, a rather darker colour than your car and I'd guess that yours has been repainted at some time. Yukon Grey GR7 should still be available from good paint manufacturers like Nexa Autocolours. Your interior is a miss-match. The rear seat base cushion shows the original pattern of wider flutes which is correct for early 1961. The back seat upright is from a slightly later car and the rear quarter panels are from the same car - not correct for yours - which is why they don't meet the rear seat base properly. The interior trim changed many times during Morris Minor production and it is hard to get hold of the correct parts secondhand. Newton Commercial produce new replica trim and whole interior re-trim kits for these cars. A look on their website might help you.
Top

These are Newton Commercial seats covers and panels fitted to my 1961 convertible, and are correct for the year. 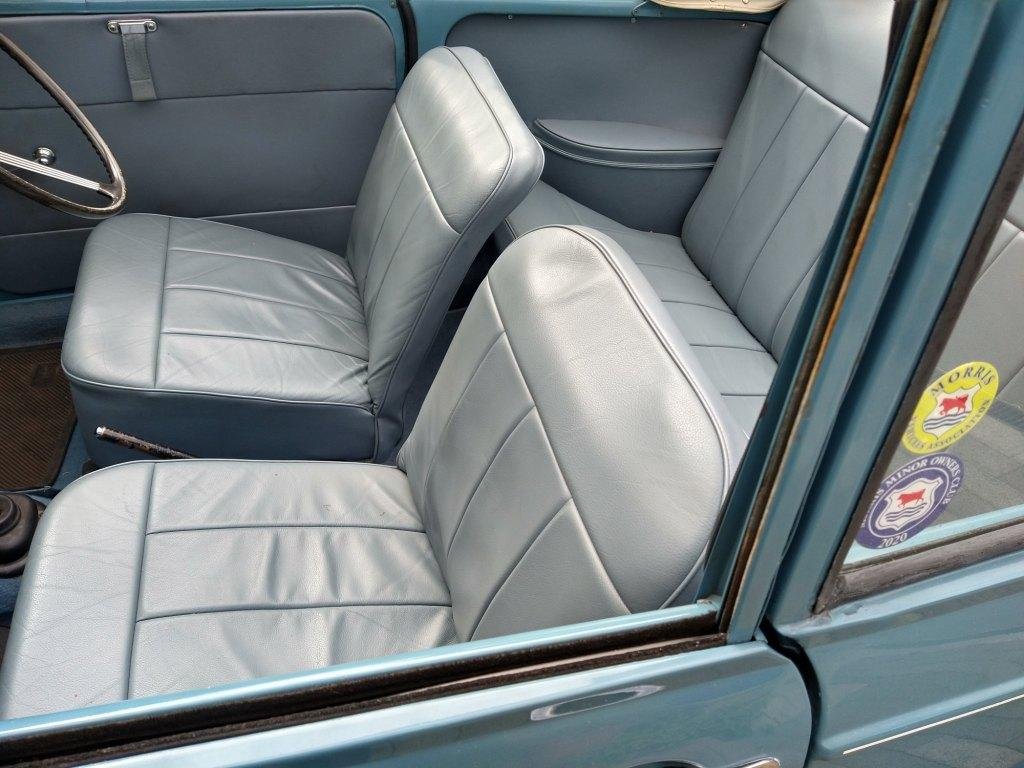 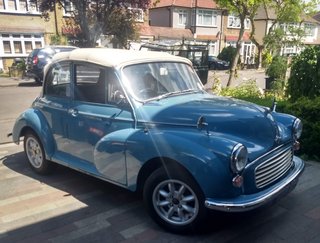 Check the chassis number. Does it have a "D" in it? If yes, then the car was a deluxe model, of no, then it wasn't. The exact spec for deluxe seems to have been a bit variable, but leather seats were definite. It all depends on how "original" you want to get. From what you already know, I'm guessing that you already have a Heritage Certificate from the British Motor Museum at Gaydon, but if not, then that can provide useful information.
Top

I simply knew, that this forum was filled with wonderfull and kind experts

Now I will start by ordering a new interior, so she can be as beautifull as she once where. Not that I don't like her now, but,,,

Within a few days, she will be stripped and prepared for a few minor repairs, before a trip to the paintshop.
I can't wait to begin the reassembling,,, Especially to see her in the right colour, the right interior and everything as close to original as possible.

Just for the record, RAL 7022 has a difference to GR7 on Delta E 0,8.
I wass told, that normal humans, will not be able to see differences below 3,0.
But I will try Nexa for the real stuff. Then I only hope, that they are able to ship it overseas. (Dangerous Goods restrictions)


And to #Simmitc, as You can see below, just like me, she's "only" a regular. Even though I wasn't born with vinylseats 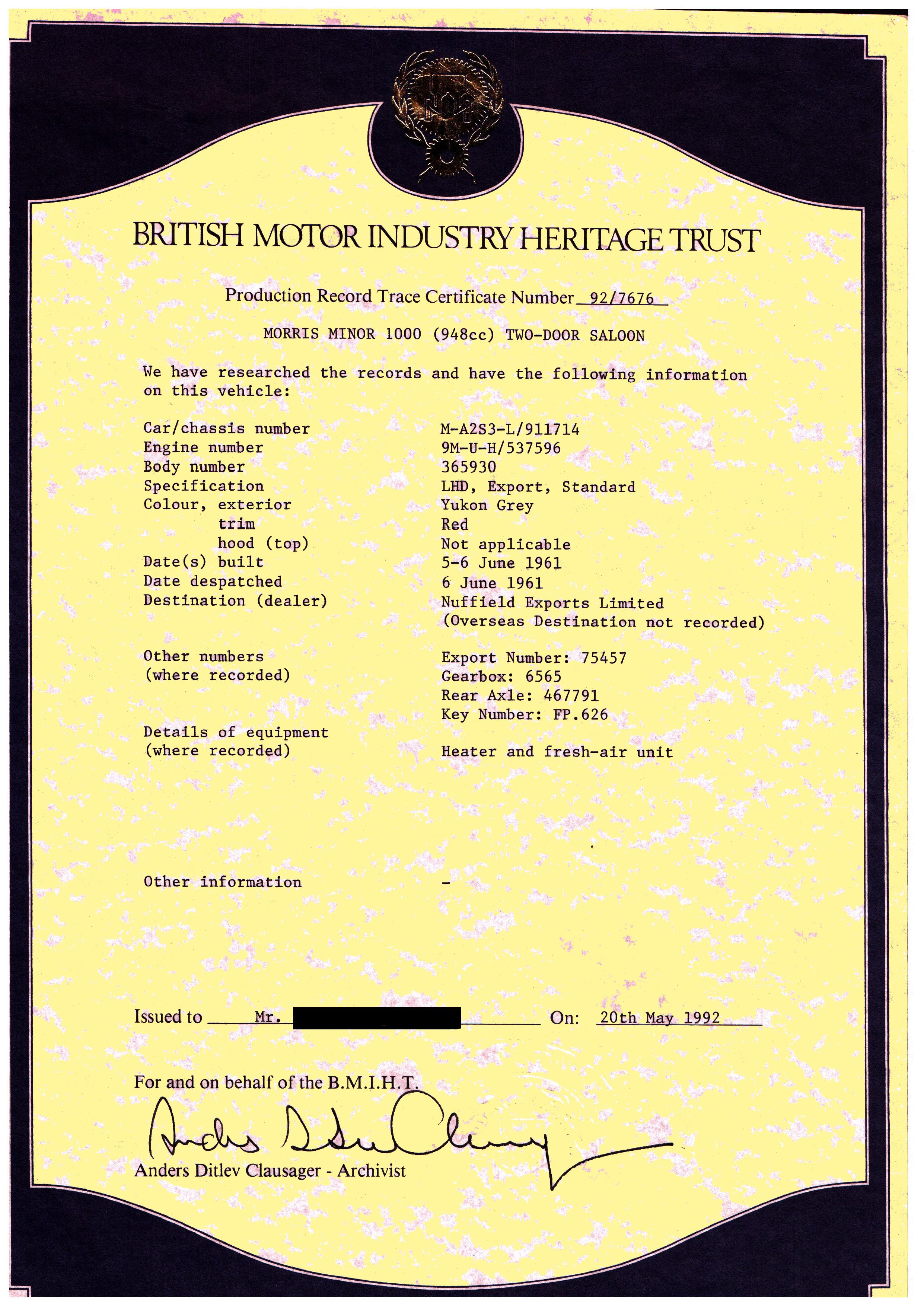 It would have had leather (faced) seats as standard in 1961.

It was only the "DeLuxe" models which had leather seat facings. The "Standard" model had a vinyl equivalent

Sorry, up to 61 they were leather. Where are you getting your information?

I can assure you that they were not on standard cars. Upto 1961 leather seat facings were supplied on the DeLuxe models only. This is knowledge gained from having worked in a Morris dealership many years ago and owning several Morris Minors during the last 50 years including a few pre 1961 "Standard" models which were always equipped with vinyl seat facings. I also still have original BMC factory parts books etc.
I have just checked Ray Newells "Original Morris Minor" book and that also states that for the Minor 1000 1956 - 1962 "leather seat facings were reserved for the Deluxe versions".
Top

My 1961 convertible is not a deluxe but had leather faced seats fitted that certainly seemed factory fitted from new (now replaced with Newton Commercial). Perhaps then it was an option on standard minors?

I never heard of leather seats being an official option but they might have been done "unofficially", or the whole interior could have been swapped earlier in the cars life? Not many of these old cars are entirely original by now are they?